July 20, 1969 was a day of destiny. On that day, the human race moved just a little farther in its evolution. Neil Armstrong and Edwin "Buzz" Aldrin took that famous "one small step for man, one giant leap for mankind" and humans stood on the moon for the first time.

We have since lost the moon; we have not been back for nearly forty years. But we have left our mark there, claiming it for humanity. One day we will return. For now, we only dream of it.

The moon has always been drawing us outwards and upwards; there has been speculation that without such a large, enticing circle in our night sky, we would not have worked so hard to improve ourselves and step beyond our abilities to find that we could do more. Certainly, the moon is not the only factor, but it is undeniable that it has left its imprint on us as a species.

"Here's to the crazy ones. The misfits, the rebels, the troublemakers. The round pegs in the square holes, the ones who see things differently. They're not fond of rules and they have no respect for the status quo. You can quote them, disagree with them, glorify or vilify them. About the only thing you can't do is ignore them. Because they change things, they push the human race forward. And while some may see them as the crazy ones, we see genius, because the people who are crazy enough to think they can change the world, are the ones who do."
-- Apple Computer commercial "Think Different" 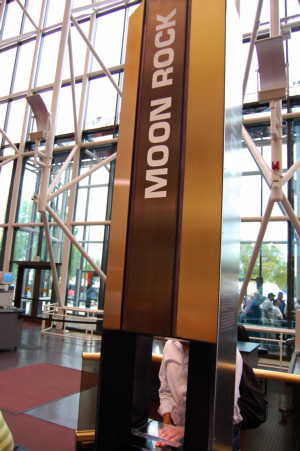 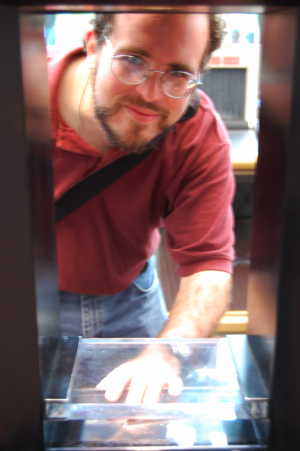 Your author touching a moon rock at the Smithsonian, September 2008

This site is a intended to be a celebration of the spirit of humanity that strives to better itself; to put aside the minor differences that separate the individual members of the species; to work together to reach for our destiny: the moon, and then the stars.

The best person suited to change your world is you. You always have the choice to remake the world as just a little better than it was before. All it takes is will and effort.

Heroism is not necessarily charging up Omaha Beach on D-Day, nor is it necessarily boarding a primitive spacecraft to journey to the moon; they are that, of course, but we can all be heroes in our own way. And make no mistake about it, we all need heroes. Subscribe to the HeroicStories mailing list to find out about everyday heroes.

My philosophy of web page design is that simpler is better; it makes the download faster, and it's more compatible with older browsers. I use style sheets heavily, but they are not necessary to view the pages. After learning style sheets for this site, I see that they are really a lot nicer than peppering the HTML code with tables and font tags.


Important resources in designing this site: